Recipes » How to Use a Tortilla Press (With 3 Recipes)

A tortilla press is a game changer if you're looking to make tortillas from scratch. Since you're reading this, I can only assume you've tasted homemade tortillas...and now you don't want to go back.

When you use a tortilla press, you trade an afternoon with your rolling pin in for a quick and easy way to get homemade tortillas on your table for dinner tonight.

Click here to jump to the recipes (WARNING: you'll also skip over the "How to use a tortilla press" video).

This post will cover everything you need to know about how to use a tortilla press, as well as tips, tricks, and even a video of me making tortillas with a tortilla press.

At the bottom of the post you'll find three recipes for flour tortillas, grain free (Paleo) tortillas, and corn tortillas. So no matter what diet you're following, there's a way to enjoy homemade tortillas. Don't you worry!

Benefits of Making Tortillas from Scratch

What is a Tortilla Press? 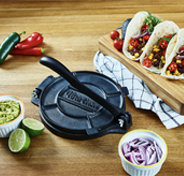 A tortilla press is a simple, yet brilliant invention.

Basically, you put a ball of dough between two plates. Then you close the plates and push a lever to flatten the dough.

Using a tortilla press saves time AND energy...sounds pretty great, right? I'm a big believer of spending as little time as necessary in the kitchen to provide my family with nutritious and delicious food, and the tortilla press is a helpful tool to make that happen.

Is a tortilla press worth it?

This is a question that I encourage you to ask yourself anytime you're looking to make a purchase. Because sometimes the answer is "yes" and sometimes it's "no". It all depends on your lifestyle and priorities (learn more about budgeting based on priorities here).

When you're deciding whether you need a new kitchen tool, think about these questions:

If you think you'll make homemade tortillas maybe once a year just for a few people, then no. It's probably not worth the space it's going to take up in your cupboards.

What can I use instead of a tortilla press?

If you're making homemade tortillas, you'll need to flatten the dough in some way.

But a tortilla press is not your only option here.

Benefits of using a tortilla press

We got our first tortilla press several years ago now, and over the years I've come to realize a few key benefits of using it (versus another flattening method).

Let me explain a little...

Multi-Tasking is Much Easier With the Tortilla Press

I like multi-tasking way too much to make tortillas with a rolling pin. When you roll the dough, expect to be rolling for about the same amount of time it takes a tortilla to cook. So you're going back and forth from the stove to the dough, until all the tortillas are cooked.

When you use the tortilla press, you place the dough ball in the press, close it, and push on the lever. In about one second it's flat and ready to cook. This leaves some time to work on preparing whatever else you're eating with your tortillas.

One Arm Free With the Tortilla Press

I've successfully made tortillas while holding a fussy toddler. Not that I'd recommend it. I don't remember it being an enjoyable experience. But I did it! And I couldn't have done that if I was rolling the dough out with a rolling pin.

Whether you have little kiddos around to hold or you like talking on the phone while cooking, or whatever else. You only need one hand to use the tortilla press!

If your tortillas are thicker on one side than the other, it'll make cooking them evenly pretty difficult. Not to mention eating them might not be as enjoyable if one bite is kinda doughy, and the next is crispy.

How To Make Homemade Tortillas With A Tortilla Press

Okay, so let's get into how to actually use the tortilla press to make your tortillas. Here's a brief description of the tortilla making process:

Steps three and four can be done in tandem. Flatten, cook, flatten, cook, etc. For more details in the process (amounts of ingredients, etc.), scroll to the bottom to the recipes.

Ever since we got a tortilla press, making homemade tortillas has been much less of a chore. It's so easy. We no longer need to get the rolling pin out and spend an hour flattening each tortilla - one at a time.

I mean...it's easy enough that my five year old daughter can do the pressing part all on her own! Here's a picture:

Which is the best tortilla press?

Now that you've realized how GREAT a tortilla press is for making homemade tortillas, you're probably wondering...which tortilla press you should get.

When the time comes for you to start your search, Amazon is a great place to start. They carry a large selection (over 700 results in this Amazon search). Or go straight to the Uno Casa website and get 10% off the one we use with the code: STB10.

We started with a different cast iron tortilla press (different brand that we found on Amazon). After a year or two of use, the metal pin that acts as the hinge for the press had bent and the tortillas weren't flattening proportionally.

Maybe we broke it because we pressed down too hard? Or maybe it just broke because it wasn't the highest quality to begin with. We'll never know. But we switched our tortilla press to this one, and so far are loving it!

If we ever decide to change from a cast iron press, we'd love to invest in a wood tortilla press like this one, just because it'd be so pretty to look at. But for now, we're really happy with our cast iron tortilla press.

How to Use A Tortilla Press - FAQ & Troubleshooting

Do You have to use parchment paper with a tortilla press?

No matter which method you use, you should use parchment paper or plastic wrap to keep the tortilla dough from sticking (to the counter, the rolling pin, or the tortilla press).

Why does the tortilla dough keep sticking to the press?

If you're using parchment paper on your tortilla press, but the dough is still sticking, you'll need to add more flour. Add a little bit at a time until the dough holds together, and doesn't stick to your fingers. Over time you'll learn what this feels like.

I've heard from a few people who try to make the Cassava flour (grain free) tortillas below that it takes a LOT more cassava flour than the recipe calls for. And that's because each brand makes their flour a bit differently. Some are finer, and some are more coarse. It's best to go by weight when measuring flours.

Why are my tortillas sticking to the pan?

If the tortilla dough is sticking to your pan, make sure you've got enough oil in the pan before putting the dough in. We use a cast iron to cook our tortillas, and as long as the pan is hot and there's a little oil in it, we don't have a problem with the tortillas sticking to the pan.

Flour and corn tortillas are both readily available in any grocery store, but cooking them from scratch will provide a more flavorful and more nutritious tortilla. No preservatives in these tortillas!

Extra bonus...you can choose what oil you use. I recommend avoiding the vegetable oils found in most processed foods, and opting for olive oil or avocado oil instead.

Here are a few basic recipes to get you started. Honestly, my favorite ones right now are the grain-free cassava tortillas. They have a great soft texture and a deliciously mild flavor.

Up until a couple months ago, I thought the only way to eat grain free tortillas was to make them from scratch. BUT I just found a brand that makes cassava, almond flour, and coconut flour tortillas. Check out the grain free tortillas on Amazon! They're delicious (but not as good as homemade).

I've been experimenting with grain-free food options in an effort to work through some health issues. These tortillas are gluten-free and grain-free. And they taste amazing!

We've had great luck with Bob's Red Mill cassava root flour (different brands have different consistencies, so be sure to either use Bob's Red Mill & measure 2 cups OR use a digital kitchen scale to weigh the flour to 4 oz).

Combine ingredients, divide into golf-ball sized balls. Then flatten (roll or press) and cook in a hot pan, flipping to cook both sides.

Note: These tend to stick when you flatten them. If they are sticking to your parchment paper too much, add a spoonful of cassava flour and try again. You can also add a pinch or two of flour to the parchment if you're having trouble. Also, this tool really helps get the dough off the parchment paper.

This was the first kind of tortilla I made from scratch. I really loved being able to control the salt content (have you seen how much sodium is in store bought flour tortillas!?!)

Combine ingredients, divide into golf-ball sized balls. Then flatten (roll or press) and cook in a hot pan, flipping to cook both sides. If the dough won't stay flattened (or rolled out) let it rest for 10-20 minutes and try again. The flour might just need to "relax" a bit.

Note: This recipe is really flexible. If the dough is too try, add a little water. If it's too wet, add more flour. Since we eat a gluten free diet, I haven't made this recipe in a few years, and I won't be able to re-test it if you have problems. However, I used this recipe for years before we switched to the grain-free tortillas.

This is the recipe found on the bag of masa harina corn flour from Bob's Red Mill. You can buy this gluten free corn flour on Amazon.

Tip: Sometimes I add a pinch of arrowroot powder to this mixture. It seems to help the tortillas stay a little softer for longer.

Mix the salt and the masa harina in a bowl. Pour in hot water. It should not be sticky or dry, but should be "firm and springy". Cover and let sit for an hour. Then flatten (by rolling or tortilla press) and cook in a hot pan, flipping to cook both sides.

How to use your homemade tortillas

Chances are, you won't have a problem using your homemade tortillas. But if you need a few recipe suggestions, I've got you covered.

Hello! I’m Megan. Wife. Mom. Jesus follower. Chocolate lover. I want to help you nourish your body with simple recipes made with real food and help you make MORE meals at home for your family (without the stress). More about me →

Get 20% Off Clean Beauty Products

Ready to Save Hundreds on Your Grocery Budget?